WHEN dealing with concussion in sport, it’s all about using that space between your ears. 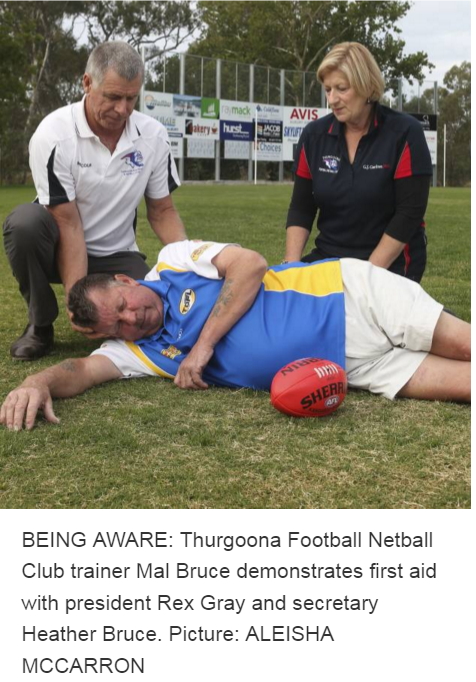 Thurgoona forum next weekend will examine the common causes, signs and symptoms of concussion as well as how to manage these injuries.

Along with the free evening community session, the event includes  a Level 1 and Level 2 training course for doctors, physiotherapists and sports trainers.

Adrian Cohen, the founder and director of NeckSafe, will lead the day at Thurgoona Football Netball Club.

Dr Cohen said with more attention given to concussion, it was important people understood the injury and how it should be treated.

“Why we take kids off the field in particular and why they don’t return like they did in the bad old days when it showed how tough you were if you could get back on the field after being knocked out,” he said.

Thurgoona Football Netball Club trainer Mal Bruce said club trainers, even though volunteers, needed the knowledge to be able to counter people keen for players to rejoin the game.

“It gives you a bit more power, I suppose, to enforce the rules,” he said.

“For trainers to be more educated in that area and say, ‘No he’s not fit to go back on the field’ is a very critical scenario.”

Dr Cohen said only about 10 per cent of concussion cases lost consciousness, with confusion, loss of balance and slurred speech among other signs.

“Kids can suffer a concussion running around the playground, falling off the monkey bars and doing all those sorts of things that are part and parcel of childhood.

“The benefits of playing sport in kids far outweigh any risks. We don’t want our kids to stop playing sport, we want to make sure the sport is safe and part of that is knowing what’s going on.”

The Albury HeadSafe community concussion forum and training courses will be held on Sunday, April 17 at Thurgoona Football Netball Club.