What is CTE (Chronic Traumatic Encephalopathy)?* 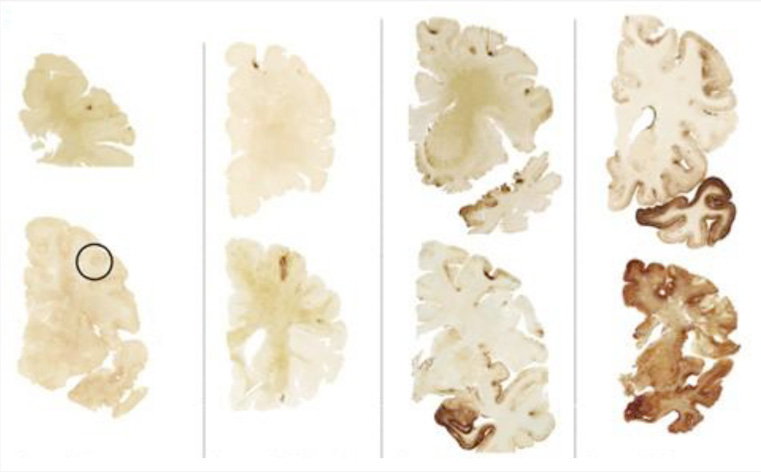 Chronic Traumatic Encephalopathy (CTE) is a degenerative brain disease can be found in athletes who have a history of repetitive brain trauma.

CTE is also found in the brains of returned service personnel and also others with similar medical histories.

In CTE, a protein called Tau forms clumps that slowly spread throughout the brain. This protein then starts killing brain cells.

CTE has been seen in people as young as 17, however symptoms do not generally begin appearing until years after the onset of head impacts.

Early symptoms of CTE usually appear when a patient is in their late twenties or thirties. These symptoms affect a patients’ mood and behavior. Some common behavioural changes include:

As CTE progresses, some patients may experience problems with thinking and memory. Other problems include:

Cognitive symptoms tend to appear later than mood and behavioral symptoms. These can generally first appear in a patients’ forties or fifities. Patients may exhibit one or both symptom clusters.

In some cases, symptoms worsen with time. This can happen even if the patient suffers no additional head impacts.

In other cases, symptoms may be stable for years before worsening.

A BRIEF HISTORY OF CTE

CTE was first described in 1928, when Dr. Harrison Martland described a group of boxers as having “punch drunk syndrome.”

Over the next 75 years, several researchers reported similar findings in boxers and victims of brain trauma, but fewer than 50 cases were confirmed.

The Brain Bank has revolutionised how we understand the disease, with more than 600 brains donated, over 360 of which have been found to have CTE.

Click here to learn more about the symptoms of CTE from Dr. Robert Stern, Director of Clinical Research at the Boston University CTE Center.

The best available evidence tells us that CTE is caused by repetitive hits to the head sustained over a period of years. This doesn’t mean a handful of concussions: most people diagnosed with CTE suffered hundreds or thousands of head impacts over the course of many years playing contact sports or serving in the military.

CTE is not only caused by concussion

The best available evidence points towards sub-concussive impacts, or hits to the head that don’t cause full-blown concussions, as the biggest factor.

Click here to learn more about the Science of CTE.

WHO IS MOST AT RISK FOR CTE?

Every person diagnosed with CTE has one thing in common: a history of repetitive hits to the head.

CTE is most often found in contact sport athletes and military veterans. This is likely because these are some of the only roles in modern life that involve purposeful, repetitive hits to the head.

CTE has been found in individuals whose primary exposure to head impacts was through:

Importantly, not everyone who has suffered repetitive hits to the head will develop CTE. There are several risk factors at play that make some people more prone to develop CTE than others, including:

Athletes who begin playing contact sports at younger ages are at greater risk for CTE. Several published studies show that exposure to head impacts before age 12 is associated with worse outcomes than starting after age 12.

Length of exposure to head impacts

There are very likely other risk factors that have yet to be discovered, including possible genetic differences that make some people more prone to develop CTE than others. More research will help scientists determine what those factors might be, and could help us understand how to prevent and treat the disease.

HOW IS CTE DIAGNOSED?

Currently, CTE can only be diagnosed after death through brain tissue analysis. Doctors with a specialty in brain diseases slice brain tissue and use special chemicals to make the Tau clumps visible. They then systematically search areas of the brain for Tau clumps with a unique pattern specific to CTE.

The brain tissue analysi process can take several months to complete, and the analysis is not typically performed as a part of a normal autopsy. In fact, until recently there were relatively few doctors who knew how to diagnose CTE.

In 2015, researchers from the VA-BU-CLF Brain Bank, led by Dr. Ann McKee, collaborated with the National Institutes of Health to develop diagnostic criteria for CTE, so that any neuropathologist familiar with brain diseases can accurately diagnose CTE. This important work has made it possible for more and more scientists to be on the lookout for CTE, helping accelerate progress.

I SUFFERED A CONCUSSION. IS THAT GOING TO GIVE ME CTE?

One concussion in the absence of other brain trauma has never been seen to cause CTE.

The best evidence available today suggests that CTE is not caused by any single injury, but rather it is caused by years of regular, repetitive brain trauma. These might be obvious, graphic episodes of concussion (a player knocked-out or staggring after an impact) or the result of many smaller “sub-concussive” impacts. There are also many individuals who suffer years of head impacts, but do not develop CTE. More research will help us understand these factors in the future.

Learn More about what is a subconcussive impact?

WHAT TREATMENTS EXIST FOR CTE?

Treating a disease that can’t be officially diagnosed until after death is difficult. Luckily there are lots of things that patients worried they have CTE can do to address their symptoms and find relief. Most treatments for CTE involve identifying the symptoms that are causing patients the most difficulty, and treating those symptoms with targeted therapies.

A variety of treatment options exist for headache, including craniosacral therapy, massage, acupuncture, or medications. Working with a doctor to determine the type of headache is helpful for determining the best treatment options.

Memory training exercises, including consistent note-taking strategies, can be helpful for continuing a patient’s activities of daily living, despite increasing difficulty with memory.

If you think you or a loved one has CTE, read more of our recommendations on living with CTE.

It is crucial that someone who is concerned they may be living with Chronic Traumatic Encephalopathy (CTE) remains hopeful.

Hear Dr. Robert Stern, Director of Clinical Research at the Boston University CTE Center, explain why CTE is not a death sentence, how those who are suffering can have hope that their symptoms can be treated, and why loved ones are so important in instilling that hope.

Hope and help are available and happening every day. Many symptoms of CTE are treatable, and there are resources to help you find support and live a full life.

If you are struggling to cope and would like some emotional support, call Lifeline Australia at 131 141 to connect with a trained counselor. It’s free, confidential, and available to everyone. You do not have to be suicidal to call.

These CTE Resources are there to support all those concerned that they or a loved one is dealing with symptoms that may be due to CTE.

Make sure you’re subscribed to our CTE Resources email list; there is much more to come.

If you are interested in contributing to research, consider pledging your brain to CTE research.

If you are interested in reviewing other opportunities to participate in research, please click the button below for more information.