A study by Headsafe researchers into stunt performers shows that they are subjected to similar forces (and the risks of short, medium and long-term effects) of concussion) as footballers.

This is the first study to measure the effects of repeated, controlled impacts which do not cause loss of consciousness or externally visible signs of head trauma.

Data on impact magnitude were collected with two wireless head impact sensors (X Patch, X2 Biosystems and Triax, Triax Technologies) worn by 4 stunt performers with no previous history of concussion.  Each participant undertook 10 back-falls from platforms at 3.0 and 4.1 meters above standard stunt mats: hard, soft aircell and soft mat over cardboard boxes. The King Devick Test (KDT) was performed pre-session and after two falls from each height into each mat type and the King Devick Balance Test (KDB) at the beginning and end of the testing session.

Impacts from 23 to 89g with rotational acceleration up to 15,0000 rads/sec/sec were recorded. Mats covering boxes significantly decreased the impact forces recorded.  KDT and KDB scores were significantly different after falls into the harder mats and from greater heights.

Performers were filmed with conventional and high-speed cameras under the supervision of an experienced  stunt coordinator.

In this study we have shown that routine training “falls” by stunt performers result in significant acceleration-deceleration forces (linear and rotational) measured at the head, despite controlled landing on approved mats.  These impacts resulted in detectable changes in tests of ocular saccades and balance, which are routinely used to assess concussion.

Indeed these tests showed that stunt performers in their usual role of repeating (rehearsing and filming) stunts and performing them for camera up to 10 times during a single day are subjected to forces up to 76g with rotational force of up to 15,000 rads/s/s.  Similar forces are experienced by senior amateur and professional footballers in a single match of American Football, Rugby Union and Rugby League.  Cumulative effects of a “career” of such forces are more than likely to result in similar medium and long term affects associated with such high-impact sports.

In a single day’s testing, objective measures of brain function (ocular saccades, smooth pursuits and balance) deteriorated by up to 10 per cent, and from a Workplace Health and Safety perspective this cannot be ignored. Perhaps it might be suggested that impact monitoring and objective testing such as this become a standard accompaniment to stunts where high impacts and falls are to be anticipated in order to protect the performers. 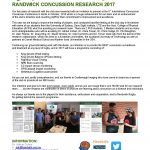