This month, Headsafe[1] begins a landmark study into Concussion Biomarkers in rugby players.

Biological markers or “biomarkers” are compounds which are released from damaged nerve cells in the brain. When they move from inside the brain outwards into circulation they can be detected in blood, urine, breath and also saliva. They reflect damage to cells and may eventually be diagnostic for concussion and of use in knowing when an injured sportsperson can return to play safely.

A number of these biomarkers are released following injury and are being studied extensively world-wide[2]. There is also the possibility that some of them are themselves the compounds which actually cause damage to brain cells in concussion. This opens the potential for specific treatments which counter these biomarkers and therefore prevent or treat short, medium and long-term damage.

One of the best publicised biomarkers is Tau Protein, the subject of the Hollywood blockbuster “Concussion”, starring Will Smith as acclaimed researcher Dr. Benet Omalu, credited with discovering the Tau biomarker in the brains of deceased NFL footballers. He proposed this as the cause of the condition Chronic Traumatic Encephalopathy (CTE), which is at the centre of a $1 billion class action settlement between the NFL and a group of past players[3].

Dr. Adrian Cohen and his research team will collect small (2ml) samples of saliva before and after matches in the Shute Shield Rugby Premiership from Randwick Rugby Club players over the next three months. The samples will be stored in liquid nitrogen at -70 degrees centigrade and then shipped in a “Cryoport” to maintain these low temperatures whilst in transit to research labs in Boston, USA.

“This is world-class, first-of-its-kind research being conducted right here in Randwick” says Cohen. 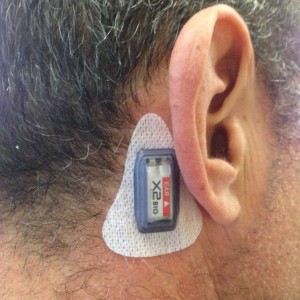 These samples will be analysed to detect changes in biomarkers in players who sustain head impacts. These are measured by the XPatch Biosensors[4] which Headsafe researchers pioneered in Australian rugby in 2015 under a program sanctioned by the Australian Rugby Union and World Rugby. Players will also be assessed using the King Devick Test by Mayo Clinic [5], a rapid concussion assessment tool utilised widely in sports and a new Smartphone Balance App, in addition to the Sports Concussion Assessment Tool (SCAT3[6]).

“This study hopes to be able to determine which saliva biomarkers are predictive of acute concussion. We can then monitor the return of these biomarkers to normal levels as an objective test that the  player has recovered. No more guesswork……just good science.”

[1] Headsafe is the concussion intiative of Necksafe Ltd, dedicated to the elimination of preventable head and neck injuries through advocacy, awareness, education and research and is recognised by the Australian Charities and Not For Profits Commission (ACNC) as a Health Promotion Charity (HPC) with Deductible Gift Recipient (DGR) status